Often, our personal memories of famous (or infamous) folks are more vivid and impactful than those provided to use by the news.

Such is the case of G. Gordon Liddy.

For those of you too young to know his name, Liddy became famous because of his role in the Watergate scandal during the Nixon administration. Some call him the “mastermind” behind the break-in that culminated in Nixon resigning.

Liddy spent more than four years in prison. He later said he’d do it all again for his president.

His loyalty to a difficult president and his participation of illegal acts made him a pariah to some. My mom never lost her empathy for him.

Mom and Liddy’s wife, Fran, went to the College of New Rochelle together. They were friendly and Mom lived in Fran’s mother’s home when Mom started her career as a teacher at an elementary school in Poughkeepsie, New York. They kept in touch as Fran married and started her family. Mom recalls the boys as being “good swimmers” and “each one of them was athletic.”

When Liddy ran for a seat in the New York congress, Mom held a cocktail party for him. She remembered her guests were more interested in drinking than listening to a fledgling politician, but Liddy was a good sport and kept his introductory remarks short and his humor sharp. If his later years evidenced anything, it was that he was passionate about what he believed in and didn’t shy away from taking action he felt compelled to take. “He had a dry wit that softened his imposing manner,” she recalled.

Why write these memories? I’ve written about Liddy’s involvement in a devastating chapter in 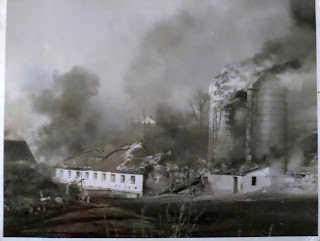 my family’s life. An arsonist burned down our family barn. Although not the lead prosecutor on the case, Liddy helped our family as much as he could.

The help he gave Mom and our family during that difficult time was enough to engender Mom’s lifelong sympathy for him. Be he good or bad, she wasn’t going to abandon him. During his four years in prison, she corresponded with him, recalling that his responses were “sparsely written” but appreciative of her connection.

When Fran died, her funeral was to be held in Poughkeepsie. A blizzard made travel difficult, but Mom made it to the church, only to find it locked. The priest said the storm had kept the family from traveling from Washington. Mom sent her condolences, but always regretted not being able to say her final good-byes in person. “I wanted Gordon to know I tried.”

Of all the reactions I’ve read about his life, I think Mom’s recollection of him is the most kind.

THE MOST NERVOUS SPOUSES OF ALL

My crime-writing friends often joke about their search histories being stuff of NSA nightmares or of the sidelong glances received when overheard in public sussing out gory scene details.

Then, there are the nervous smiles from our spouses.

One friend couldn't decide on which poison to use to kill a pesky antagonist. Arsenic? Too common. Cyanide? Too traceable and the bitter taste a dead giveaway that could stop a victim from drinking a lethal dose. After sounding ideas off her husband, she gave him an iced lemonade made without any sugar to see how much he would drink before stopping.

He took a sip, put down the glass, and asked, "We're happy in our marriage, right?"

Long live the long-suffering spouse of a writer.

I thought my husband and I were beyond such misunderstandings or fear. After a year of 24/7/365 togetherness, all fears and worries should have been dispelled, or at least thoroughly aired out.

We start each session with a prompt and write for five minutes. I've posted a few of the responses in this blog and it's always fun to see the different ways we continue from a single beginning. This time, the prompt read:

The last few nights she had a recurring dream about ...

The delicious thought wrapped her in layers of warmth. No more leg twitches. No more snorts and grunts. No more stale flatulence.

The wave of happiness receded with wakefulness. "Damn it," she said as she pulled on her robe.

Then the dreams invaded her days. She couldn't stop the thoughts. Her only respite came in planning actions. Gun? Too messy. Poison? Where to buy? Accident? How? When? Where?

The thoughts wrapped her in happiness.

Then...he didn't wake up. She nudged him.

She took the pillow from his head.

She woke to a snort.

He rolled over. "Morning," he said.

We read our responses aloud to one another, laughed at our follies, and continued on with our session. Afterward, my husband appeared at my office door. He gave me a nervous smile. "That's not the first time you killed a husband in your writing."

He then listed other times my characters' husbands or significant others met untimely ends. His memory stretched back into years.

"We're happy in our marriage, right?"

Posted by Connie Johnson Hambley at 11:19 AM

Sisters in Crime New England at the Newburyport Literary Festival!

Make a Mystery with Sisters in Crime New England Authors 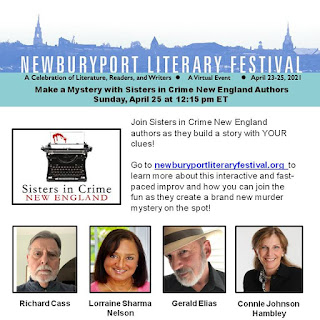 ​Join Sisters in Crime New England authors Richard Cass, Lorraine Sharma Nelson, Gerald Elias, and Connie Johnson Hambley as they build a story with YOUR clues while pulling back the curtain on the writing process! You’ll provide names, setting, motives, weapon and more. From each suggestion, the authors will talk about what goes in to each decision and how one small detail can alter an entire story. Join us for this interactive and fast-paced improv with authors and enjoy the fun as they create a brand new murder mystery on the spot!
Go to: https://newburyportliteraryfestival.org/ to learn more about registration for this FREE event.
Posted by Connie Johnson Hambley at 2:06 PM