NEW BOOK: ROOT OF ALL EVIL by Liz Milliron

Liz Milliron is the pen name of debut author Mary Sutton. Mary and I "met" in the comments section of a popular mystery and thriller blog, Jungle Red Writers. I'll confess to lurking in her virtual world and was thrilled to learn we are both published by Level Best Books.

The Root of All Evil's release date is August 14 and you better pre-order now!

The Idea Factory by Mary Sutton
It’s a staple at every author event I’ve ever attended. Someone is bound to ask, “Where do you get your ideas?”
Sometimes the author has a brilliant answer and sometimes they stutter one out. Me, my answer would be deceptively simple and seemingly evasive, but absolutely true.
“Everywhere.”
No joke. I can see a story on the nightly news and think, “There’s a story there.”
I’ll overhear a snippet of conversation, either standing around a store or maybe someone is talking on a cell phone. And wham! I think, “What a great line for a story.” When this happens, I take out my phone and capture the line in Evernote, which syncs to my computer for later. In fact, one of these overheard lines (“You better fix this.”) was the inspiration behind Root of All Evil. More are waiting in Evernote for the right story:
"She should have thought of that before she sent him the naked pictures."
"If you're going to shoot someone you don't have to check his Outlook calendar first."
"I have a knife, but I'll just leave it in the car unless I need it."
"I was just out walking my dog, and boom, a dead body."
Of course, anything taken from real life needs to be…massaged before publication. You don’t want to get in legal trouble, and information needs to be changed to protect the innocent. But sometimes, you don’t have to use the information as-is. Sometimes, it merely sparks the creative process. My favorite? Reading or hearing something and asking myself, “What if…?” A writer can come up with a lot of fodder that way.
The other downside to using real-life incidents? Sometimes it’s too unbelievable for fiction. As Mark Twain (I think) said, “The difference between real life and fiction is that fiction has to make sense.” And boy does it ever. I have a friend who shares real life criminal “stupid tricks” on Facebook. For example, the guy who ditched his fanny pack to avoid being caught during a pursuit…except he left his wallet, keys, and nine kilos of heroin in the pack. Or the bank robbers who pass their hold up notes written on the backs of envelopes with their address on it. These things absolutely happen, but there’s no way writers can get away with it.
Yet there are many memes about being friends with writers: how you might end up in their stories; how anything you say can be used in fiction; how they aren’t just staring at you, they might be deciding if you belong in their book (and whether you need to be killed).
And you know what? It’s all true.

About THE ROOT OF ALL EVIL: 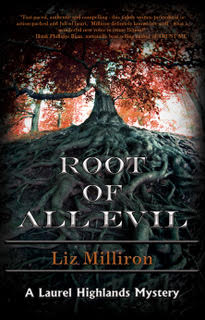 Rumors of a meth operation in rustic Fayette County catch the attention of Pennsylvania State Trooper Jim Duncan. When he learns that Aaron Trafford, a man who recently dodged a drug conviction, has returned to the county, the conclusion seems obvious. Trafford has set up a new operation.
Meanwhile, assistant public defender Sally Castle’s colleague, Colin Rafferty, has become uncharacteristically nervous and secretive. Her suspicion that he’s hiding something serious is confirmed when she learns of a threatening visitor and discovers a note on his desk stating, “You’d better fix this.”
Colin’s subsequent murder is the first frayed thread in a complex web of deceit. Jim fears Sally’s stubborn determination to get justice for her friend will put her in a killer’s crosshairs, but Sally won't rest until she finds answers--even if it costs her everything. 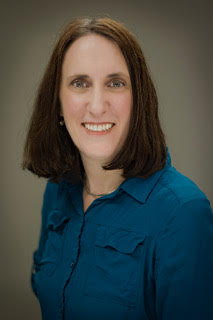 Liz Milliron is the author of the Laurel Highlands mystery series, featuring a Pennsylvania State Trooper and a Fayette County public defender in the scenic Laurel Highlands of southwest Pennsylvania. The first in the series, ROOT OF ALL EVIL, was released in August 2018. Liz’s short fiction includes stories with the same characters in Lucky Charms: 12 Crime Tales and The Killer Wore Cranberry: A Fifth Course of Chaos, as well as stories in Mystery Most Historical, Fish out of Water, and Blood on the Bayou. She is a past president of the Pittsburgh Chapter of Sisters in Crime and is a member of Pennwriters. Liz and her husband live near Pittsburgh with their two children, where she dreams of having a dog…someday. (Headshot courtesy of www.erinmclainstudio.com)