A Decent Proposal and a New England Road Trip

If you know me a little bit, you know that I'm president of the New England chapter of Sisters in Crime. You also know that my stomping grounds encompasses six beautiful states, and a little bit of New York, too. 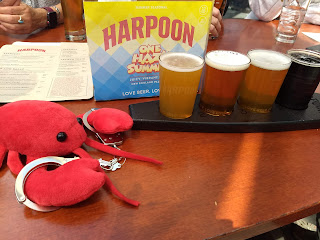 One mission I gave myself this year is to meet as many members as I could in their native habitat. I wanted to see the countryside they call home and meet their extended writer tribe.

When a Vermont member said, "C'mon up!," it struck a happy note. We decided on a local brewery in what I thought was in a forgotten corner of the state. But it's summer road tripping time, and surprising discoveries are what it's all about. Right? 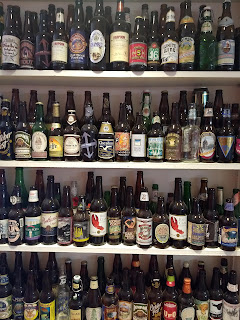 The Harpoon Brewery in Windsor, Vermont is a hangout haven. Outside, lush plantings surround badminton and volley ball nets. A lawn filled with corn hole platforms and bean bags encourage plenty of friendly competition. Picnic tables and Adirondack chairs wait under shady trees for families and friends to sit and relax a spell. Live music adds to the laid back vibe.

Once inside, you're greeted with a wall of beer proving this place is far from a forgotten cubby hole.

Our group was six writers strong and pulled from northern Vermont, New Hampshire and even a Canadian ex-pat. Our host traveled twenty minutes. Another traveled more than ninety. Over shandies, stouts, and IPAs, our conversation touched on all aspects of our writing life. 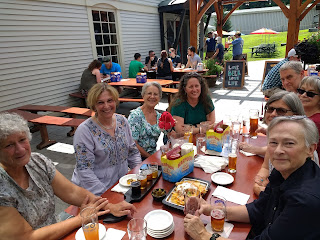 And the lobster in hand cuffs? For folks in-the-know, the mascot of New England Crime Bake (a mystery and crime writers' conference for those of you out-of-the-know) is a recognizable friend. The day's host, Genie Parrish -- a member of Sisters in Crime New England and a past attendee of Crime Bake -- won a book basket raffle with a tiny version of our mascot duly perched on top. Genie helped set the tone by bringing it along, and it quickly became the star of the day. Our conversations continued and we became aware of another ripple of excitement. 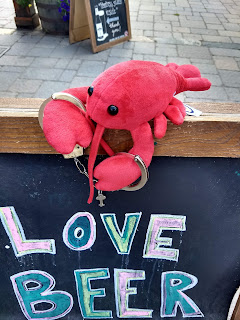 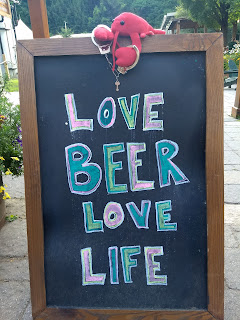 The excitement wasn't about our mascot. At the next table, a young man in a blue-striped shirt got down on one knee in front of a very surprised young woman. He said something. She dabbed her eyes. He slipped a ring on her finger. She dabbed her eyes some more. Our road-tripping destination was their proposal location. The daughter of our host paid their tab as a gesture of love and support.

I, being the ever-nosy author, wanted to hear their story. 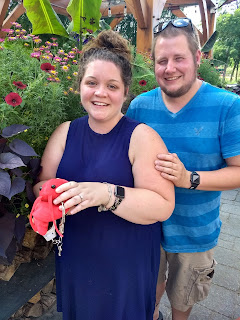 Chris and Emily met online over five years ago. He wanted to meet in person. She said no. He said let's go for a walk. She said she wasn't ready for anything more. He said we can just be each other's friend. They've been inseparable ever since and were already planning to buy a house together, but Chris decided a rock on his sweetie's finger would make a house an even better home.

So, the Crime Bake mascot added a bit more lore to its legend, and this writer got a road tripping story I won't soon to forget. 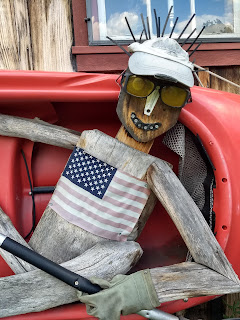 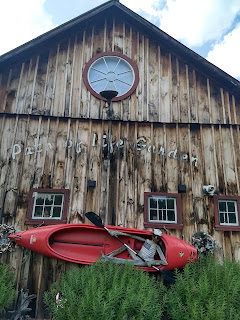 Posted by Connie Johnson Hambley at 11:45 AM