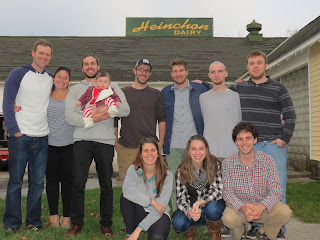 An inescapable fact of being human is we will experience the spectrum of human emotions. Humans don't live forever. Period. Grief will come in forms expected or shocking: A loved one reaches the end of a long and productive life, or a phone call or a knock on your door splinters your world. The inevitability of grief creates a shared experience, but the process of grieving itself is deeply personal. Does anyone truly know how you feel when someone you loved dies?

My family's soul has been seared by the heat of this loss and we are forever changed. Maybe our hearts were clay and are now hardened to the point of becoming brittle. Maybe the loss brought to fullness something within us that needed a catalyst to become completely realized. I only know the evidence of change will unfold in time.

I'm a seeker. I try to find meaning, purpose, and beauty wherever I can. This, however, has me stumped.

Six weeks ago, my world changed. I unplugged. I was too stunned to take in any more information. So, I stopped and looked around.

I saw my sister surrounded by a community that will not let her fall. I saw my niece step up to help my aging parents absorb the news and travel from Florida to Vermont. I watched as my children reached a deeper level of appreciation for and connection with their extended family. I glimpsed the world my nephew created through the hundreds of people who came to pay their respects. I stood amazed as my sister began her process of grief with a strength and dignity I could only imagine.

I saw a beauty in these things I did not know existed. I hold my breath as I write this: I saw good in the face of the unspeakable.

The full impact of our grief is only beginning to unfold. We've yet to gather at a Thanksgiving table with one less setting. We've yet to see the perfect Christmas gift that will remain on the shelf.

But, I will hold on to the good I have seen and know that it is part of our shared--and unique--journey. 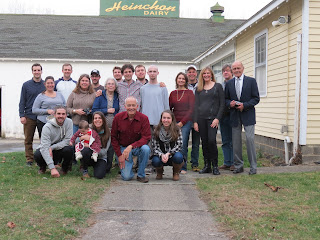 Posted by Connie Johnson Hambley at 9:28 AM 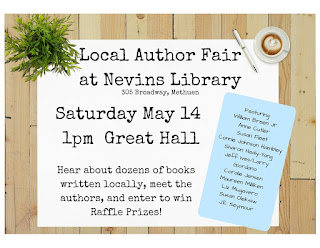 It's time for the Local Author Fair at Nevins Library in Methuen!  Come Support Local Authors and find your next favorite book!

The authors will have their books available for purchase and signing.

This years featured authors include:
* - Member of Sisters in Crime
Posted by Connie Johnson Hambley at 3:26 PM

Email ThisBlogThis!Share to TwitterShare to FacebookShare to Pinterest
Labels: Events, Sisters in Crime

I think, of all animals on Earth, women bear the closest kinship with horses (I can hear the snickers and the whispered sexual jokes all the way in Oklahoma). The infinite variety of women – from kind to spiteful, approachable to traumatized, independent to codependent – finds its mirror in those equine beasts who have roamed the world and carried humanity on their backs for millennia.

Since their domestication, horses have done the heavy lifting for humanity in a variety of industries: farming, transportation, entertainment and competition, and war. They have patiently born abuse, neglect, and eventual dismissal from human economics. And yet, their mystery, strength, and attraction have never diminished. Women have long fought to have an equal voice in the world while shouldering the burden for… just about everything outside of own well-being. We raise children, keep houses, work full-time jobs, cook, manage household finances, provide sex and comfort for our spouses. And while we take care of all that, we ignore our own basic needs, which leads to many of us growing sick and exhausted. Further, for much of recorded history women have remained silent and accepted their secondary place in society, certain it was what nature – and whatever god they happened to worship – demanded. Yet, their mystery, strength, and attraction have never diminished either. In fact, I would venture to say that these very qualities, so reminiscent of horses running free on the hills and plains of the world, is a contributing factor to their subjugation in history. After all, what is the primary desire when one sees something beautiful and untamed? To catch it, hold it, possess it, and bend it to our will. Not always maliciously. Often we simply want to express our own wildness in what we have been led to believe is a safe and responsible manner.

Another clear point of comparison is a herd mentality. And I do not mean that either horses or women sacrifice their own minds or wills to belong to a group. Instead, I think both species find comfort and safety in being in a tightly knit unit. Think of some of the most successful television shows featuring multiple female leads: Golden Girls, Sex in the City, Sailor Moon, Designing Women, Jem and the Holograms, Josie and Pussycats, My Little Pony, Charlie’s Angels, The L Word, Facts of Life, Charmed, Living Single, and others. Sure these women fight and sometimes even want to kill each other, but there is something inherently attractive and alluring about women in a dynamic and multi-layered group. How else can we explain the popularity of a show like Orange is the New Black that focuses on women in prison? When we see representations of women in groups like this, a part of us wants to be there, in that group. And I believe it is because we live best when we are part of our own protective herd.

Men often complain that women are difficult to understand. We rarely deal with problems in a head-on fashion, which has led to us being labeled underhanded, sneaky, manipulative and many other equally uncomplimentary descriptors. Horses too are often accused of underhanded behavior, striking when their handlers’ backs are turned. With horses, I think they are simply reminding their people not to underestimate them, to never believe they are entirely broken. Sometimes it takes a swift kick to the arse or a sharp snap of the teeth to wake a stubborn person up to certain truths. You could say the same for women. Though, if that is the case I believe it is operates on a more subconscious level. A more definitive reason for our round-about tactics is an innate wish to avoid harm, our own as well as others. We want to solve problems and rectify bad situations, but we also – at least most of us – do not enjoy causing friction or hurt feelings. And so we attack problems from the side. Too, I think women have learned over the course of centuries to handle other people, especially men, with great care because of a fear for our own personal safety. Women are adaptors, a study in evolution; chameleons, who have perfected the art of survival so well, it is now a part of our collective unconscious (perhaps even our DNA).

I’ve long had a fascination with horses, and with women. They both are such complex beings capable of the unexpected. Dangerous, lovely symbols of the feral world and of the elegance of our natural world. I don’t mean to idealize either women or horses. They can both be ornery, bad-tempered, even vicious under the right circumstances. But I think it says a lot that horses and women have survived being the servants of humanity with both their dignity and beauty intact. 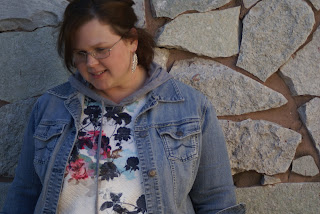 R. L. Martinez writes fantasy and science fiction with dark edges and corners. She began writing in the seventh grade when a teacher assigned R. L. her first ever creative writing project. She lives in Oklahoma with her husband, two young sons, a mouse-killing cat, and two naughty pooches.

In the Blood Book Blurb: 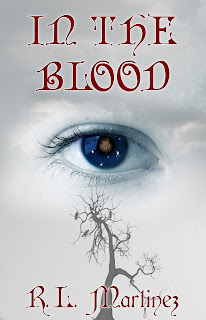 The war between Dosalyn and Roanaan has ended, but a new battle begins for prisoner-of-war, Ottilde Dominax. Dreams of her witchbreed twin sister are visions of death and betrayal. Driven by their grim warning, she escapes her captors and races across nations to save her sister.

But she may arrive too late…

The Witch
Oriabel Dominax has kept her healing magic secret while she cares for her family's struggling estate. But the arrival of a new lord with secrets of his own, the discovery of a dark and addictive magic, and threats from a cruel blackmailer push Oriabel closer to disaster.

Through it all, the Witch’s Tree calls…