The Hardest Thing I've Ever Written

On November 24, I wrote a post about the hard knowledge that the coming holidays would be my Dad's last. I thought we'd have Christmas. He had other ideas and passed away six days later. As hard as it is, we are relieved he didn't suffer pain nor the indignities the aging and ailing often endure. He passed on a Thursday with my mom by his side, in his own bed, very peacefully. His wake was the next Sunday. He was buried on Monday. In less than five days, the ceremonies of life and death exhausted us and left us dazed.

I'm still coming to grips with the reality of it. My mom asked me to write a Eulogy and to read it at Dad's funeral mass. I'm a writer, so I process my emotions through my fingertips, but it was one of the hardest things I've ever written. I wanted to howl in grief, but, instead, I sat in my parent's breakfast nook off the kitchen and typed silently while family and friends milled about. I'm sharing it here for a lot of reasons. I think my Dad needs to be known. Posting this makes it more real.

So, on the Sunday after my dad died, I stood in the front my hometown church, straightened my back, and read: 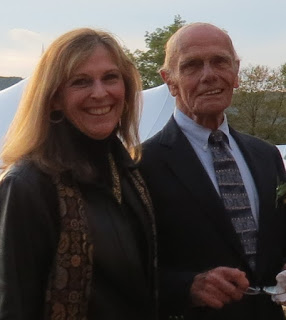 We’re here today to celebrate a life well lived. My dad was a tough old Swede. Or at least, that’s what he’d want you to think. But I think each of us who knew Dad, knew better. Inside that often crusty exterior, was a guy who had his priorities straight, who suffered few fools, and who loved deeply and with a loyalty we can all aspire to.

The love and outpouring of grief our family has seen humbles us, but it would blow him away. He never wanted fuss and bother, or for you to go out of your way for him. He didn’t ask for favors. He lived a simple and morally true life. He was practical, but he was a dreamer, too. He always saw the better vision, the good in the person, or the way around a problem. And he was stubborn. Sometimes that combination worked. Other days, not so much, but he tried.

He loved it when people got along with one another. The town of Pawling will remain a beautiful a town for generations because the dreamer in him saw what could be, and then, in his affable way, brought the sometimes warring parties to the table and helped whittle down their resolve into his vision. They might have thought it was their idea to worry about open space or mixed use or density, but anyone who knew Dad, knew better.

My mom's faith is carrying her through this difficult time. A devout Catholic her entire life, recent years found her redoubling her prayers for her eternal togetherness with my dad. Dad was a Congregationalist and precedent states he could not be buried next to my mom in the Catholic cemetery. Her rosary beads are rubbed down to the nub. She knew what she was up against.

Oh, did I mention Dad was stubborn? Kent Johnson didn’t do anything he didn’t want to do. Growing up with him, Sunday services and Sunday school were for the kids, and trips to confession were done with our grandparents, Daniel and Elizabeth Heinchon. Holy communions and confirmations were propelled by a very proud mother. But Dad? He was golfing.

One Easter Sunday after mass where we were all milling about greeting one another on a beautiful day, Father Duff came up to my parents and greeted my mom warmly, then looked at the church, dramatically looking from the steeple to foundation and back up to the steeple. Then, he shook Dad’s hand with a sigh of relief and said, “Miracles happen. The church is still standing.”

Through this simple act, he showed a love for his wife that will truly be eternal. 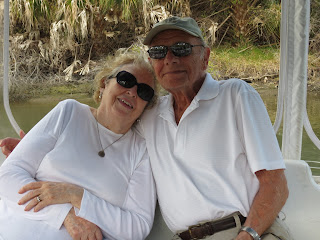