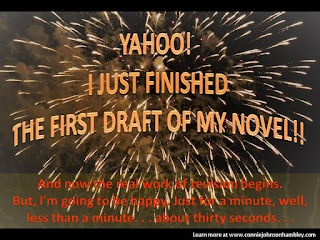 One picture is worth one thousand words.

In my case, it's closer to over one hundred thousand.

Finishing the first draft of anything is momentous, but for this particular book it feels like I've crested the summit of a mountain. When I wrote my first novel, The Charity, I did not expect it to be the beginning of a series. Readers loved the story and asked what happened to the main characters after the final scene. Realizing I had an answer, I knew I had to write the second novel, The Troubles. I branded the series a trilogy because I didn't want the story line to run out of steam or for the characters to stop being compelling.

Unwittingly, I boxed myself into one hell of a challenge.

The third book needed to have its own reason for being. It needed some new characters and a plot that zinged. It also needed to conclude a few narratives and themes I had developed.

Oh. And I'm a pantser. I knew where I wanted the characters and the story to end, but I didn't know how I was going to get them there. It's like being in Vermont and saying you want to go to New York City. That's all fine and dandy, but are you going to take the train? Bus? Drive? If driving, will you take the Major Deagan, Saw Mill, or Hutchinson River Expressway? Having a destination is great, but you need to know how you're going to get there.

For me, if I'm writing and my characters surprise me, then I know my reader will be surprised as well. I'm not saying how much this book sapped the life out of me, but at times it felt like I was in an Escape Room diabolically created without a solution.

One tool that really helped me focus my story was drafting a brief log line for each novel. By reading the progression of my narrative through the eye of a needle, I could weave a tighter story.


The Charity: Witness to a gang-style slaying, a young woman is hunted to stop her from exposing the money and the people behind a Boston-based terrorist cell .

The Troubles: Deceived by her family, a rebellious woman seeks to unearth how Northern Ireland’s Troubles are buried in her mother’s secret past.

Charity and Troubles flowed out of me. I knew exactly what I wanted to give the readers. The third book took longer to percolate to get all the pieces just right. I workshopped a few log lines for The Wake, but when a best-selling author and fellow Sisters in Crime member read the following, she pulled me aside and said, "If you can deliver on that, you've got yourself another winner."

The Wake: A shattered heiress’ family secret is exploited by her spurned lover to blackmail her into engaging in international terrorism.

Throw in a bombing at a summer Olympic games and I knew I had a corker of a story in my head. The trick was getting it out.

I can't advocate my process to others, because I drove myself crazy. As I progressed the draft forward, I revised and crafted earlier chapters. The first third of the book has been workshopped with my writer groups, and the final third is raw, raw, raw. I know the real work of writing begins with revisions and edits. I look at a first draft as throwing a lump of clay on a potters' wheel. Once out, the true shape emerges through the process of sculpting, shaping and refining with the final beauty in the firing of a perfect glaze.

But today, I wrote a sentence and, in a shock of clarity, realized it was the last.

I did an end zone dance and got back to work. 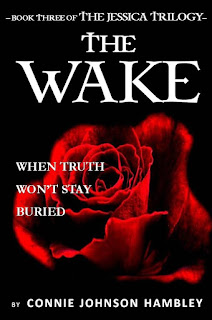 This is a proposed cover? What do you think?