STRONG IN THEIR WEAKNESS by Michelle Cox

I'm a sucker for a story about strength found in surprising places, so when my next guest told me about her experiences in speaking with women at a nursing home, I was all in. Please read on as Michelle Cox introduces us to three incredible women and the window into a different kind of strength they provide.

Strong in Their Weakness
by Michelle Cox

Several years ago I found myself wandering the halls of a nursing home, visiting with residents who happened to be mostly women and mostly immigrants.  As I got to know them better, listening to their unsung stories, I was stunned that so many of these women, bed-ridden or hobbling along - a frail skeletal version of their former, robust selves - had lived such incredible lives of strength and fortitude.

Almost all had a story to share about overcoming the odds, of endurance and hardship, and sacrifice. I was struck by the spectrum of attitudes I heard. So near the end of their lives, many had slipped into bitterness and depression, still harboring anger and nursing the many wounds they had picked up along the way. This was what I had expected to find.

What I was surprised by was that some who had had equally hard, even tragic, circumstances retained a positive demeanor and even a smile. They had a sparkle to them, a certain radiance. I found myself naturally more attracted to these women and sought them out for further conversation, hoping to discover the secret to this seemingly misplaced happiness. As I went from room to room, collecting stories that varied widely in circumstance and which circumnavigated the globe, it became clear to me that the central theme was always the same. Forgiveness.
One of the first women I spoke to was Danuta Szwarc, who saw the Russians invade her tiny village on the border of Poland and Germany in 1941 and witnessed her husband being shot.  She and her four children were then packed into a train and sent to a Siberian labor camp where they spent the remainder of the war, near starvation, until liberated.  They were then taken to refugee camps in Pakistan and India until they finally made it to the United States.  Here, they began again, with Danuta tending her grandchildren and filling the house with people and food, love and laughter.  Her children say of her that she was the “most positive person we’ve ever met,” and that, indeed, “she could move mountains.”

Emilia Morales was born at a similar time, 1909, but in a small Mexican village, frequently raided by Pancho Villa and his revolutionaries. Her well-to-do family often hid from his criminal gang in secret compartments in the walls of their home. Emelia witnessed horrific violence at the revolutionaries’ hands as well as horrible abuse within her own family. Incredibly, not only was she beaten by her father, but by her older sister! Emilia eventually married a mean, manipulative man with whom she had four children. Two of them died of cancer, as did her husband, leaving Emilia alone to make ends meet, which she did by working long hours as a cleaner in a hospital. Despite the life of violence and misery she endured, Emilia still goes about with a smile, looking forward to what the day will bring, always saying “tomorrow is another day” and “I don’t let things bother me.”

Equally inspiring is the story of Soon Ok Shin, who was born in Korea in 1911 and after completing grade school was married by arrangement to a wealthy businessman.  She had three children, but was forced, via a common custom at the time, to give her first child to her brother and his wife who couldn’t have children of their own. She was further saddened when her husband took more wives after her, again a common custom among the rich of Korea. Eventually, she was able to escape her husband and her life in Korea when her two children immigrated to the United States and sent for her. Here she lived with them, helping to raise their children and grateful for even the smallest kindnesses. She remains a very warm, humble person, encouraging and full of concern for those around her.

These are a few of the stories that stood out for me as I walked through those lonely halls - stories of women who, despite almost any degree of tragedy, could not only find the strength to keep going, but to somehow be happy. These women were strong in their weakness. They found the ability to forgive the many wrongs done to them. At first glance, this might seem a weakness in and of itself, but forgiveness was the ticket to a deeper power, a letting go, a freeing - that no one or nothing could shake. Though they were often trapped by circumstances, they were not trapped by bitterness and actively chose forgiveness – not only of the people who hurt them, but perhaps themselves as well and were therefore able to look forward with promise.

Therein lies their strength and the secret to their happiness, their contentment, their peace, even now, in this moment, in this place.

Michelle Cox writes the popular blog, “Novel Notes of Local Lore,” which features true stories of Chicago’s forgotten residents as well as a humorous blog, “How to Get Your Book Published in 7,000 Easy Steps – A Practical Guide,” both of which feature on her website. Her novel, A Girl Like You, the first in a series, is due out with She Writes Press this April. Ms. Cox lives in Chicago with her husband and three children. 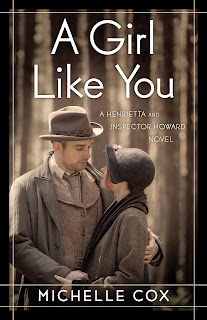 A Girl Like You is a historical mystery with a dash of romance set in 1930’s Chicago. Beautiful Henrietta Von Harmon works to support her family after the big crash and her father’s subsequent suicide. Things begin to look up when she takes a job as a taxi dancer - until the floor matron turns up dead. When the aloof but charming Inspector Clive Howard appears on the scene to investigate, things begin to heat up when she is persuaded to go undercover for him and they uncomfortably find themselves drawn to each other in most unsuitable ways.