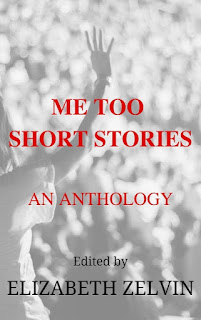 It’s been almost two years since the #MeToo movement dawned in the aftermath of the story about movie mogul Harvey Weinstein’s long history of harassing and abusing women. The phrase “Me Too” was actually coined years earlier by activist Tarana Burke. Since its dawning, the movement has only picked up speed, giving women the courage to come forward with their personal stories, to find strength in their shared experiences, to reflect, act, and heal.

What the movement hasn’t seen until now is an anthology of fiction on the theme of crimes against women, retribution and healing. Me Too ShortStories: An Anthology, released on September 3 by Level Best Books, is the unique, innovative brainchild of author/editor Elizabeth Zelvin.

Fiction, as all art, engages the intellect and emotional core while it entertains and enlightens. We’ve heard it said, brilliantly, many ways: “Fiction reveals truth that reality obscures” (Jessamyn West). “There is no doubt fiction makes a better job of the truth” (Doris May Lessing). “Fiction is the lie through which we tell the truth” (Albert Camus). The fictional tales in Me Too Short Stories, far from being autobiographical, nevertheless tap the reality and truth that all women share. Besides the enjoyment that any good tale brings, each story in this collection is a launching point for reflection and discussion about personal experience.

“What do women want? A voice. To be heard. Respect. To be believed. Justice. To be both safe and free. The women in these stories have daughters, sisters, friends. The minister worries about her parishioners. The banshee worries about the Hippocratic Oath. The microbiologist worries about her obligation to the dead. They will use any means to protect themselves and those they love: a childish jingle, a skillet full of cornbread, a candle, their own quick wits. We cannot ignore their voices.”

The anthology includes fifteen tales that fall within the many subgenres of crime fiction, from psychological suspense to classic mystery to cozy. I am proud to have a story in this wonderful collection. To give you an idea, here are no-spoiler teasers of the stories, in the order in which they appear in the anthology:

“No Outlet” by V.S. Kemanis


When a young single mother moves into the neighborhood, Arlene is called to action on her behalf by the rekindled memory of her secret source of guilt.

“Never Again” by Elizabeth Zelvin
Fourteen-year-old Valerie has been living in hell since she was four. Frances, hiding shame behind obesity, is trapped in an abusive marriage. Valerie and Frances will never meet, but they’re on a collision course.

“Pentecost” by Eve Fisher
It’s hard to be the first female pastor in a small town, but even harder when you know the dark truth no one else wants to admit.

“The Call Is Yours” by Rona Bell
A young woman who wants to be noticed learns that admiration is fleeting, but shame will last until the world changes.

“The Final Recall” by Diana Catt
In the near future, science can retrieve memories from the brains of the dead. Sara finds her job a waste of her hard-earned doctorate—until she realizes that she and a nameless cadaver share a memory that could be fatal.

“A Measured Death” by Julia Pomeroy
Mary’s life has been eroded in service to the massive talent of her pianist husband. Will she ever find a way out?

“Miss Evelyn Nesbit Presents” by Ana Brazil
In 1914 New York City, real-life Evelyn Nesbit—celebrated beauty and well-publicized rape victim—makes a desperate bid to reframe her past and rewrite her future.

“Stepping on Snakes” by Madeline McEwen
Naive or precocious? One girl’s decision. Set in the vanished world of South Africa in the early 1960s.

“Women Who Love Dogs” by Dayle A. Dermatis
Merlin needs exercise, and overworked Vanessa and her wheelchair-bound sister need cash. Rent-A-Pup seems like the perfect solution. But how do you really know who’s walking your dog?

“Jewel's Hell” by Lynn Hesse
Jewel’s “normal” is teenage prostitution. But in a dysfunctional family, when one person does something different, everything starts to change.

“Banshee Scream” by Gin Gannon
Does the banshee scream to warn the victim or the killer?

“A Dog's Life” by Ann Rawson
Liverpool 1980. After moving off campus to escape a stalker, might Liz find herself in a more dangerous place?

“Subterfuge” by Julia Buckley
For young women in Sophia’s small town, all paths lead only to dead ends. Is there anything Sophia won’t do to get away?

“The Taste of Collards” by C.C. Guthrie
With single-minded focus to protect her children, Lizbeth follows the age-old adage, necessity is the mother of invention.

“Chrissie” by Carole Sojka
Chrissie is sure she is all grown up, but how wrong she is!

Me Too Short Stories is available now from Level BestBooks, and from Amazon in e-book and paperback editions.

V.S. Kemanis, attorney, dancer, choreographer, and mother, has squeezed fiction writing into her life for thirty-five years. Her stories are collected in five volumes and have appeared in many publications and anthologies, including most recently Ellery Queen's Mystery Magazine, The Best Laid Plans, and Me Too Short Stories. Her latest book, Your Pick: Selected Stories, won the 2019 Eric Hoffer Award for best story collection. Kemanis draws on her years of experience in criminal law for her legal suspense novels featuring prosecutor Dana Hargrove. The fifth Dana Hargrove novel, Seven Shadows, will be released in January 2020. She currently serves on the board of the New York chapter of Mystery Writers of America.