Living in the Digital Wild West

No sooner do I think I know what I'm doing living a virtual life in social media, than I learn a tough lesson. 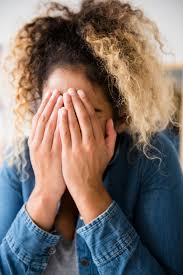 You see that little badge on the right side of my blog? I'm thrilled and flattered to be listed in FeedSpots Top 50 Mystery Blogs. I share the rankings with Strand Mystery Magazine, Dru's Book Musings and Mystery Writers of America's blog.

I guess that means I've done a lot of things right when it comes to writing and being a member of the writing community. These tools at our fingertips are incredible at amplifying our message. We reach out on various platforms, we connect, and we share.

I'll share with you that I've also done a lot of things wrong.

At the beginning of my blogging life, I set up this blog with a URL that referred to my first book. A rookie mistake, for sure. When I named the blog "Out of the Fog," that name and other variations were taken, so I kept the first address. Silly me. I blogged, connected, and built an audience. Hooray! Now I'm writing and querying a second series unrelated to the first, and decided to clean up my digital footprint.

I found it was incredibly simple to rename my blog to what you see today:  https://cjhambleyblog.blogspot.com/. It was so easy, I wondered why I had waited so long! I knew I'd hit a few bumps and reached out and updated as many links as I could.

In the shadows of the Internet, evil forces were at work.

My old address was quickly usurped. (I naively thought old addresses go into some kind of stasis until the world changes enough for them to be recycled...like a virtual cooling off period. I know. Dumb.) You know how followers of a blog get updates each time a new post goes up? Imagine the surprise of followers of the old address when they were notified of a new post. This time, it wasn't news on a new book or a guest post from a mystery author. This time, OH! 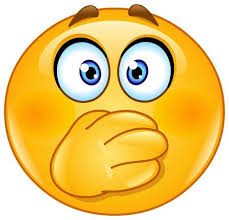 For all of you impacted...please accept my apologies.

As for my FeedSpot ranking, I've notified the Powers That Be and informed them of the address change. I'm hopeful they will make the change quickly. For you? Please follow me at this new address by clicking the button in the lower right column and like my Facebook page, too.

In the meantime, I may look at this obstacle as an opportunity. You know the adage, "Crime Doesn't Pay"? I've heard that readers of erotica are voracious.

Maybe I'll just change genres. I already have a jumpstart on an audience.

Posted by Connie Johnson Hambley at 7:08 AM 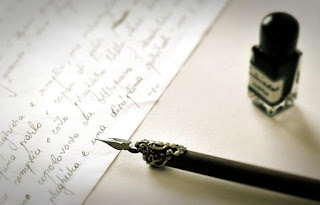 
What would you write? I find I usually pull a thread of something I had heard or experienced in the week leading up to the group meeting. This week, the news was filled with Jon Stewart shaming lawmakers to take action on the 911 First Responders bill. You'll see his influence in my response.

What did we write to?

"Where did everyone go?" I shouted...

"Where did everyone go?" I shouted...but they were all there...kind of.

Grace sat in the back of Doug's pick up truck, parked in the usual spot between the trees in the cherry orchard.

Hot boxing was new to her and seemed weirdly intimate.  Inhale deep from the joint, then cup your hand and blow directly into your partner's mouth.  Getting high wasn't unique at these parties, but this went to a whole new level.  The effect was akin to hallucination but fairly short lived...thankfully.

Grace peered out of the flatbed and saw her crew swirling around.  She fell back and drifted off.

“Where did everyone go?” I shouted. But they all promised they would stay to the bitter end! “I can’t do this alone it is too scary!”

As I stood there wondering what to do next the front door creaked open and a hand came out, wrinkled and deeply veined, it wrapped itself finger by finger around the outside knob of the door. I gasped, sweat streaming down my back, “Give me my cat back! You mean old witch! She didn’t do any harm to your stupid cockatoo! Your bird attacked my sweet little kitten. Your bird is the killer!”

The hand moved opening the door wider, now I can see a skinny arm and a bush of long straggly grey hair. Whoosh, out flew a cockatoo heading …

"Where'd everyone go?" I shouted, but

no one answered. Why did they leave so suddenly?

I jumped off Mariana to let her get a drink and that's when I saw it. A huge water lizard in the sand. Hissing with its wide jaws as it moved toward us.

My big beautiful doe began snorting. She grunted, jumped, spit, and made other sounds I'd never heard before. Seeing her step between me and the monster made me angry.

If that ugly beast draws a drop of blood from my tall-leg's white coat, I will kill it. Kill it with my small hands. I was afraid before but now I would lose my life protecting hers.

I will be like my spirit animal. The tall-leg.

“Where did everyone go?” I shouted but… There was no one there to answer. What the heck? “Hello!” I( had been to the loo for a quick pee, and – Where did they go?

Smoke! I smell smoke. The house is on fire. I ran to the nearest slider, and tugged, but it wouldn’t open. I tugged, saw the board set there to keep out an intruder and knew to go to a different door. The front door was open and I went through it. “Hey! Where is everybody?”

Nothing. What the heck? “Hello!” I heard laughter. Where? Down by the barn. But it was dark, and there were brambles. I tripped along, slipped on a rock and fell on my butt. Guys! Where are you?

no sound came out. I moved, but my fingers didn't twitch nor legs flayed. I filled my lungs to scream, but my chest didn't rise.

That's when a fear crept inside me.

I had been at my company's fancy breakfast. The city laid out before me on an amazingly clear day. I thought I had been in the buffet line, reaching for the eggs Benedict.

"Where did everyone go?"

But I was falling. Then nothing. 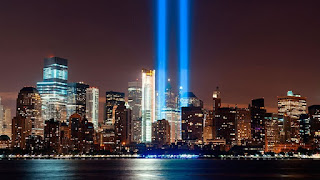 Memories blended in a timeless way I had never known.

But I remembered one standing Twin Tower as I fell.
Posted by Connie Johnson Hambley at 5:15 PM