True Grit and The Art of Productivity 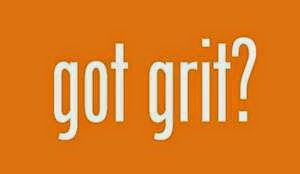 We creative types have a black hole in our lives. In its sweetest form, we call it our "muse."

We stare at a blank canvas or keyboard and sigh. We look out our windows and wait for our muse's arrival all the while believing that our work can only be done deep within this elusive synergistic partnership. Much has been written about finding our muse. Without our muse beside us, we dither with writer's block or fret about a creative dry spell. If this has happened to you, grab a hold of whatever screen you are reading this on and slap yourself over the head with it.

Waiting for your muse in order to produce is utter and complete nonsense. Breathe deeply and square back your shoulders. Grow up. Dig in and use some grit.

"Grit" is defined as having courage and resolve or possessing a certain strength of character. It's a "stick-to-it-ness" and perseverance that neutralizes the alternatives of giving up on or drifting away from a task.

One of the best discussions of the power of grit was given at a TED talk by Angela Lee Duckworth. In it, she discusses how innate intelligence is not enough to guarantee success, but that grit is the better predictor. She describes her successful math students as those who actively and continuously engaged on a task until it was mastered. IQ did not matter. Sticking to it did.

Grit is different from discipline. A recent posting caught my attention with the headline, "Screw motivation, what you need is discipline." My favorite line is, "If you wait until you feel like doing stuff, you’re f*****d." Perfectly stated! Motivation is a mood. Discipline, it states, is a process and the engine to productivity. I agree with the post, but argue more is needed than merely discipline. Discipline makes us say "no" to temptations and time sinks (like water cooler chats or vacuuming under the couch one more time). Discipline parks our butts in the seat while waiting for the muse bus to arrive.

Grit makes you an active participant engaged with being productive. Grit makes us put one foot in front of the other and forces words into sentences. Grit makes us sideline our fears and supports us in stepping up to the task. Grit helps us realize that we are the only ones who can make it happen and then makes us take those small steps forward in our goal.

I hear examples of grit every day. It's the writer who stays glued in her seat until her daily word count is met. It's the artist who allows herself to begin a piece of art with a crappy idea only to begin molding it into something fresh and new. It's the executive who gathers the team together one more time for an ad hoc brainstorming session. It's the worker who asks for help and insight that one time more.

Grit is in each of us when we turn our backs on the window and stop waiting for our muse.