Sex and the Council on Aging

Before you say "Ew!" and squint your eyes away from the vision, I have a story for you.

I do a lot of public events to promote my book. Most of the time these are readings where I know the audience has not yet read it, so I keep the spoilers to a minimum. My favorite events are book clubs - either via Skype or in person - where readers can dig into the details of the book. I know the readers love hearing why I chose a particular narrative thread or background details on a scene. I'm always impressed with the level of insight my readers have on the subtle shadings that made their reading experience more enjoyable.

I was a little nervous when I entered the room and saw a dozen white heads look up. The Charity has some very potent scenes, both violent and sexual. They pretty much looked like a cozy mystery and women's fiction kind of crowd. I prepared to defend myself and to apologize for offending them, but my book is a thriller after all. Yada, yada.

Boy, was I wrong.

I always ask if Jessica ended up with the right guy at the end. Were they "Team Shea" or "Team Michael"? I winced a little and waited for the onslaught.

I knew it was going to be a good meeting when the opening statement was made by one participant, two palms pressed against the table. "That scene in the cabin was terrific. Wow!"

They loved it. They loved the fact I did not shy away from difficult scenes or veer into cheap. I gave just enough detail to let the reader know what happened and to conjure the reading experience I wanted them to have. The murder scenes were graphic without blood spurting everywhere. And, in the infamous wisdom that less is more, the sex scenes invited them to feel for themselves the passion the characters shared. They let me know that I struck the balance between providing the details needed for clarity and evoking the reader's true emotions. They appreciated that I stayed away from the cheap tricks of detail that only serve to cover up that the writer doesn't know how to keep a reader's interest.

One woman, with slight Kentucky drawl and a smokey voice, sighed, "And that <spoiler!> is HOT. You can tell he's gooooood!" They loved that the story captured the emotions of the characters. The conversation continued the way you want the best of book clubs to be - filled with laughter and insights.

They were not thriller readers before, but are now. I never would have assumed my book would have resonated with their demographic as a profile of my enthusiastic reader. I'm so happy it did. 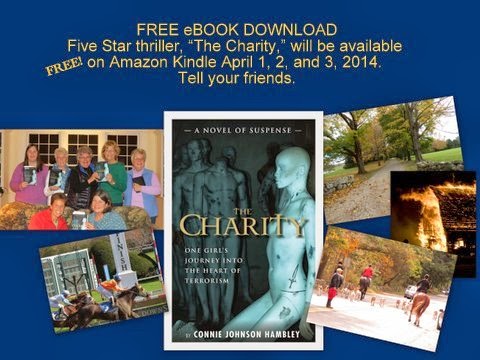 Tell your friends about this limited time offer. On April 1, 2, and 3, 2014, five star thriller, The Charity, will be available for free download via Amazon Kindle.

The Charity tells the story of a young woman who stumbles across the money behind a Boston based terrorist cell. Readers and reviewers agree that this fast paced thriller will keep you guessing and on the edge of your seat until the last page is turned. Join the fun, download during the limited promotion and discover a world where things may not be what they appear to be.
Posted by Connie Johnson Hambley at 11:03 AM 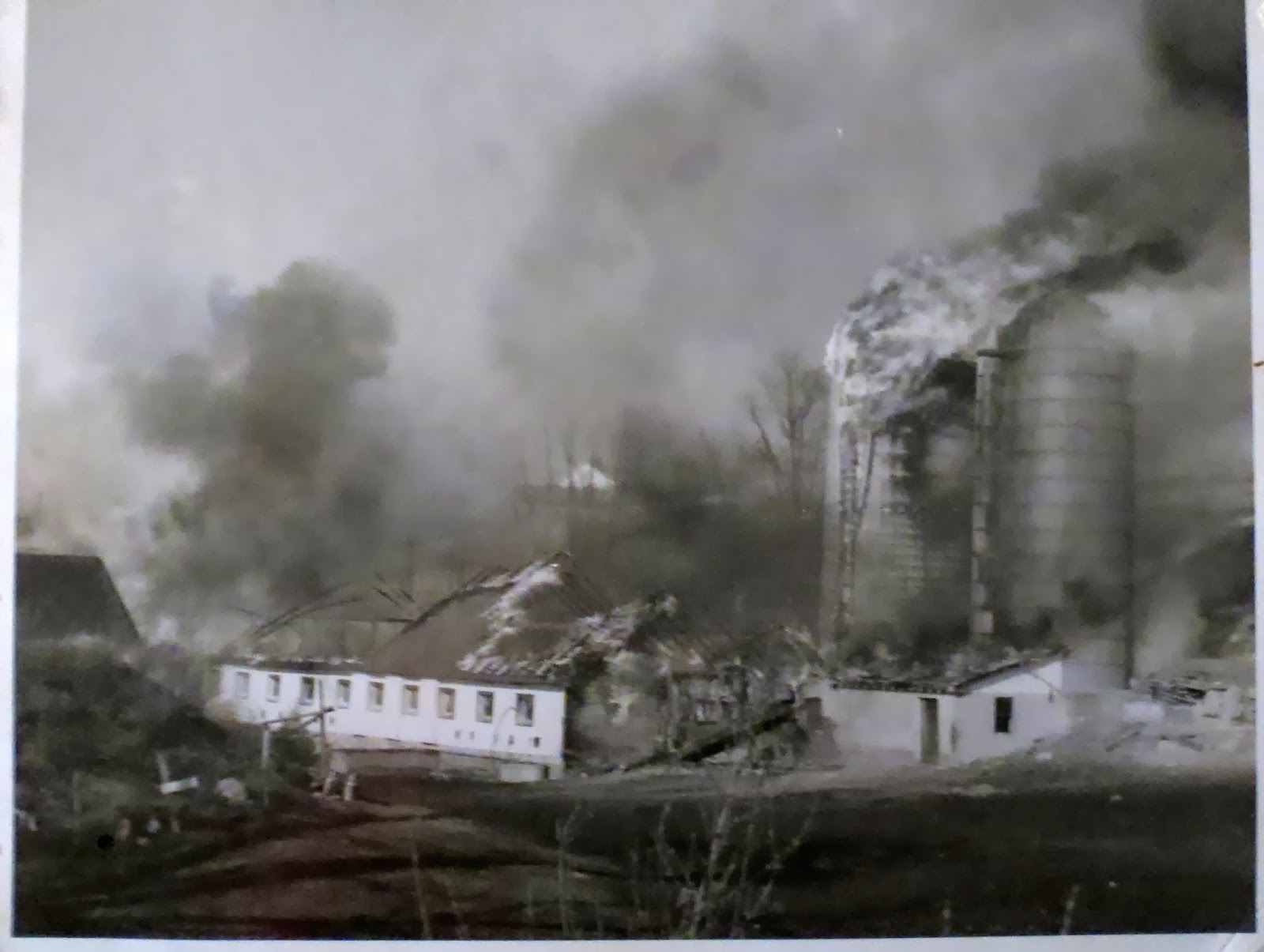 Go ahead. Think of whatever St. Patrick's Day images you can come up with. Leprechauns? Shamrocks? A pot of gold? Maybe even few drunken sots?

So, how about arson?

I grew up on a dairy farm in a little town just north of New York City. That picture you see above is what my back yard looked like on St. Patrick's Day* when I was a wee little girl. I know what you're thinking - What drunken idiot accidentally set that poor girl's barn on fire?

It wasn't a drunken idiot. And it wasn't an accident.

My family is very Irish, so getting ready for the Big Day meant the kitchen refrigerator was decorated with school-project shamrocks and loaves of soda bread sat round and crisscrossed on the windowsill. We enjoyed a simple and secure life. We had enough and we shared what we could. My parents and grandparents worked hard and did well enough to employ a few folks, too. Life was pretty good.

For reasons known only to him, one of the men hired by my father took exception to our family. Whatever we had, he didn't, and that festered in him somehow to the point where he wanted to destroy it. I don't know what his thoughts were, but he waited until milking time when the cows were locked in their stanchions, lit a match and threw it into the hayloft. The gasoline was waiting.

The Irish are known for counting their blessings. Here are mine. No cows died. My father, who repeatedly entered the barn to release the cows, did not get one scratch on him. No one else did that day either. See those flames? They are blowing to the east. If they blew to the west or north, my home and my neighbor's home would have burned, too. The casseroles, cakes and cookies that filled our home over the next few weeks were enough to feed a small army, which we did. The small battalion of people who came to help us transport cows, clear debris, hold my mom's hand and help carry my dad's load were royally fed. I don't remember any tears after that first horrible day. I only remember the love and laughter as we all worked together.

It took a while, but we got to our feet again.

So, go ahead and smile and laugh at the St. Patrick's Day* revelers. It might be for different reasons, but I'll be smiling right along with you.

*Ah, geez. Since that post, the cobwebs have come off and the wheels of memory started to churn. The fire actually occured several days before St. Patty's. Thank the advent of weekly newspapers for blurring recollections. Soda bread, as well as corned beef and cabbage, were served a lot in my house and the refrigerator held lots of shamrocks - as well as St. Christopher's metals. My apologies to St. Patty for besmirching his good day. 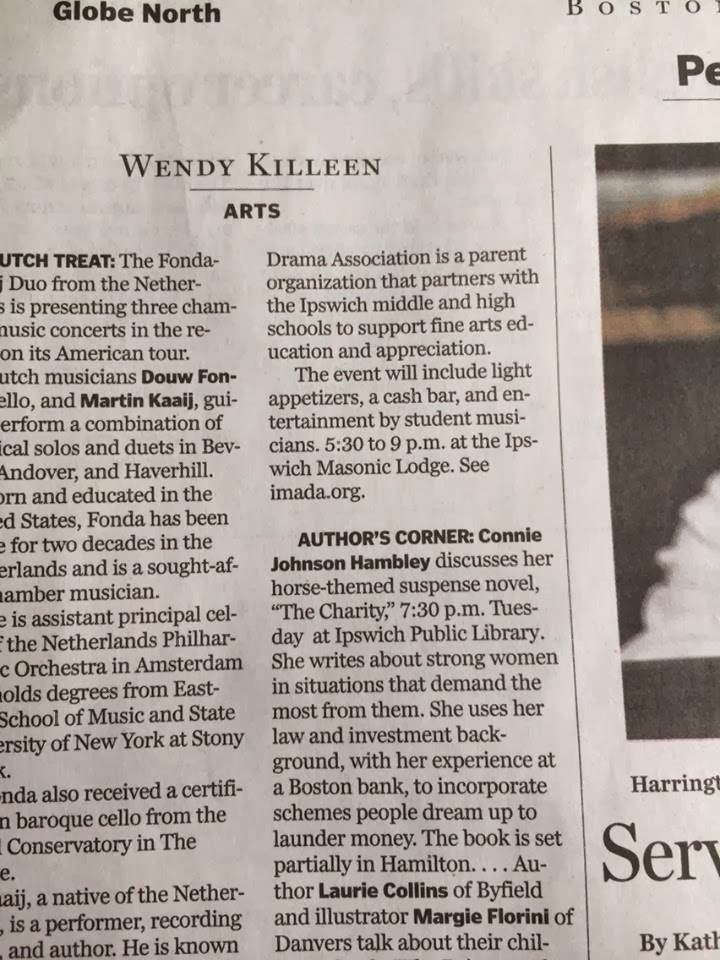 In addition to the private book club events I'm always happy to do, I'm very pleased to have been invited to speak at several public author events. Spread the word and I hope to see you there!


Friends Program
7:30 PM
THE CHARITY
An Author Talk
Connie Johnson Hambley will discuss her suspenseful horse-themed novel The Charity which is set in Hamilton.  Ms. Hambley writes about strong women in situations that demand the most from them. She uses her law and investment background along with her experience at a major Boston bank to incorporate clever schemes people dream up to launder money. This event is free and open to the general public and will be held in the Collins Room at the Library, 25 North Main Street, following the Friends Annual Meeting at 7:00 p.m. Sponsored by the Friends of the Ipswich Library. 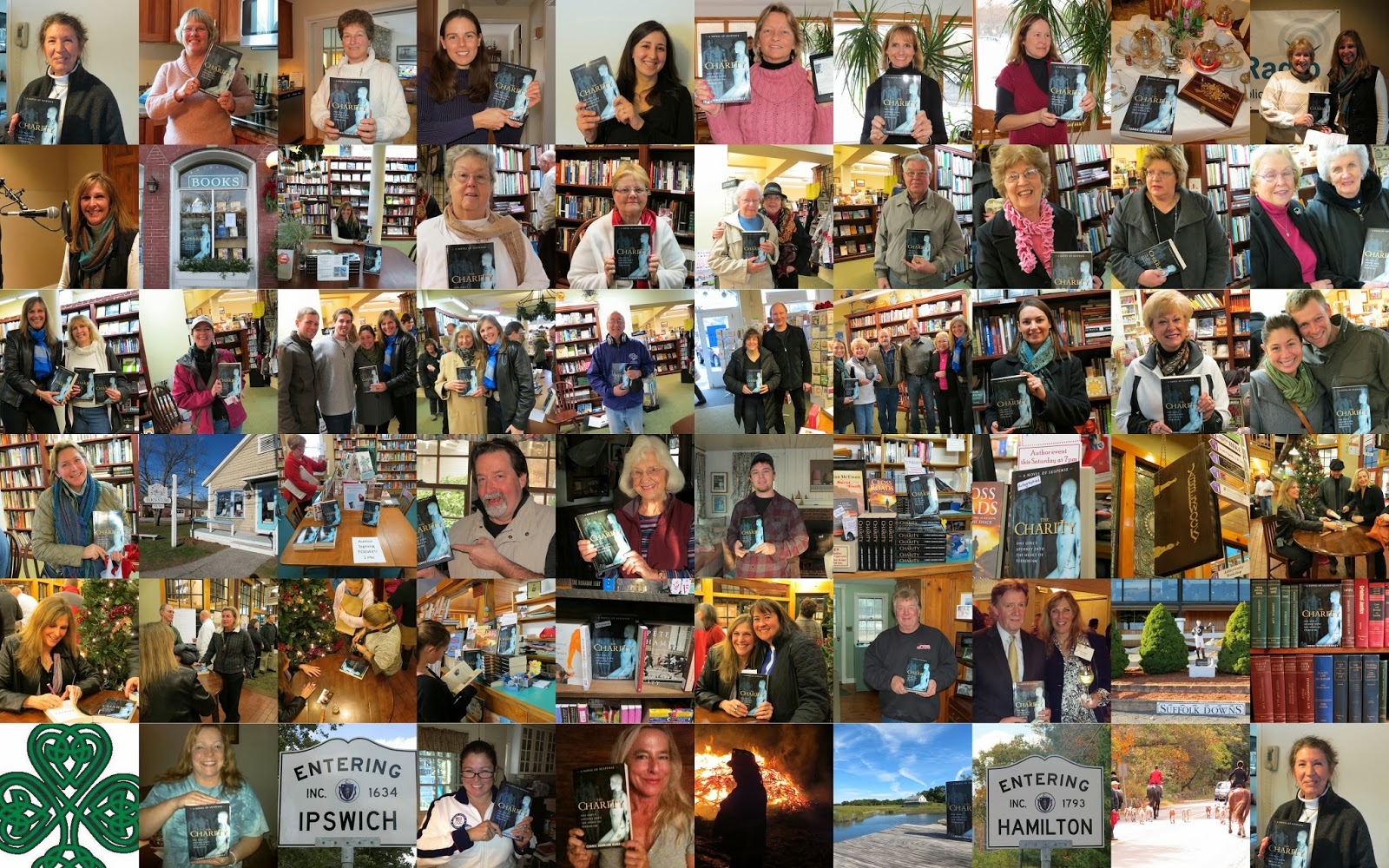