I'm writing this five days after the Boston Marathon Bombing. While we struggle to make sense of this senseless act, many struggle to heal from wounds and losses no one wants to imagine. What needs to be said before anything is that my love and prayers go out to the victims and their families.

I live on the North Shore, barely thirty miles from Boston. As you have undoubtedly heard, Boston is a close-knit town and you did not have to be at the finish line on April 15 to feel the impact of these events on a deeply personal level. Like many parents, I experienced the lead weight fear in the pit of my stomach as I tracked down my son - a student at the Berklee College of Music who lives on Boylston Street - to thankfully learn he was enjoying a beautiful spring day off from school out of the city, far from harm's way.

Placing the phone down after connecting with him, I realized I was not washed clean with relief. The pure feelings of safety and security did not rush in to replace the feelings of concern and worry. Instead, the familiar, yet vague, sense of waiting came over me. "It" didn't happen to me or to someone I love. "It" was still out there, biding time.

In a recent interview about my book, inevitably I was asked about the lingering impact of an act of hatred long after the visible traces of healing had cured. Unfortunately, I have a bit more firsthand insight into the answer than I would like. As a child, my family was targeted by an arsonist. At a very early age, I learned that bad things happen to good people. There is a bubble of security that we are born into. It is the bubble we inhabit when we walk down a dark street without fear, or hear the slowing of a car behind us and know we will not meet harm, or stand in a crowd of people and feel we are among friends. It is the bubble where the voice of doubt that tells us to look over our shoulder cannot be heard. It is the place where harm is a hypothetical, an "if." That bubble burst for me when I was five and was replaced by a world of "when." My world became a place of when bad things happen not if they could happen.

There is an arch of surprise that bends over an event like what just happened to Boston. You can hear it in the bystanders' interviews and see it in the faces of people on the streets. "It" happened. Here! How can that be? Sharing the communal feelings of the shock and the grief and the sadness is part of the healing process that binds us together in a way subtly different than we were before. We are different because our world has shifted. The membrane of security ruptured and we are left to feel exposed.

I have lived a robust life in the world of "when" and have not been hobbled by the fears surrounding "if." The evidence of my experience is visible in ways I'm not always aware of. I do know that there is a clarity I have when I hear of a terrorist attack or another senseless act. It is an unfortunate act of fate that this clarity has already been recognized in my writing. I know that I cut through a lot of emotion because I don't have to wade through the sludge of shock. Bad things happen to good people. It's just the way it is.

Of course I wish that the 117th Boston Marathon ended the way it should have - with stories of personal bests and of traditions honored for another year. One thing I know for sure, once the keening and anger have subsided, we will settle into a world of "when" and be much stronger than we ever thought we could be.


Posted by Connie Johnson Hambley at 11:03 AM

Please note that the date has been postponed until Thursday, April 25 at 7:30.

UPDATE: I'll be back at Emma Andrews on November 19, 2015. More information can be found by linking through here. 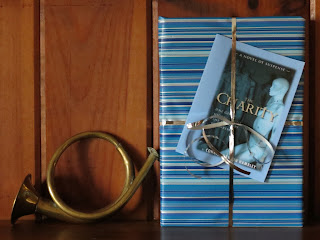 I was pleasantly surprised when much of my time today was spent signing and sending books ordered through this blog site. I personalize each softcover book and include a special note of thanks. My readers send books for a variety of reasons including acknowledgement for a job well done, birthday wishes and simple encouragement. A few 'order givers' even admit to having the book personally inscribed to themselves!

It's quick and easy! Just click on the "Buy Author Signed Copies" button in the right hand corner. That will bring you to a secure PayPal site where you note your preferences and delivery address.

Allow one to two weeks for delivery. I'll contact you within 24 hours if I have questions or if you indicate you need express delivery (additional charges would be incurred).

Reader Observations of "The Charity"

(There are some mild spoilers ahead.) 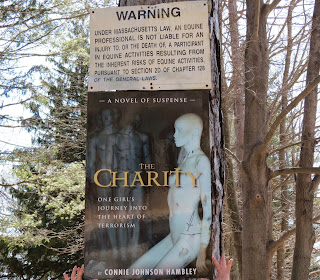 Readers of The Charity come from a variety of different backgrounds. They are young and old, men and women. I am learning that each reader finds a truth which makes the book especially compelling for them.

One of my readers observed that no matter how much the main character, Jessica Wyeth, tried to hide, her privileged upbringing could never be successfully hidden. Dying her hair or changing her name would never hide the behavioral and personality quirks that exposed who she really was. This reader really knows what she talks about. As one of the country's foremost forensic psychologists, she has been an expert witness in several high profile criminal cases. One her favorite scenes was when Jessica was having a conversation with Electra Lavielle, a wealthy and powerful woman. Jessica was not intimidated by Electra's position and enjoyed a playful exchange. Also, she noted that Jessica's fears and behaviors in the book accurately reflected what someone would feel if the events had been real. These dynamics work together to create a character that is both flawed and compelling.

I was very pleased with the compliment. The actions and behaviors of characters in thrillers make or break the story. Think about it: Where is the suspense if a character decides to avoid the cemetery on a dark and stormy night? It is exquisitely suspenseful and enriching if the reader understands why a choice was made or an emotion displayed. The symptoms of Post Traumatic Stress Disorder are accurately reflected in Jessica's character. The resolution of PTSD in Jessica helps to resolve the story. I was gratified to hear from an expert that the story rang true to her and helped her to love the story.

One of my guy readers wrote that he "only reads historical non-fiction." He said he doesn't have a lot of time to read, so when he commits to a book, he wants to feel as if he's getting something in return. After finishing The Charity ('in record time' he notes), he praised the book's accurate portrayal of money laundering schemes and grand jury proceedings. Although the story itself was fiction, he felt that he learned as much from my book as he would have from a non-fiction book.


I'm glad he felt that way. One of the processes I went through while writing this story was to make sure it was as accurate as possible in describing the business behind the money of illicit organizations. I used my career experience in the banking and financial worlds to make sure what I wrote was crisp and accurate.

More than one reader comes away from the book feeling that they have really learned something. I respect the fact that my readers are smart people. If I wrote a completely implausible plot line and did not surround it with facts that my readers know were true, they would have felt cheated and their reading experience would have been cheapened.

And Jessica would never tolerate being cheap.