I’m so glad to have Ann Simas join me again on my blog! Ann is an accomplished and prolific author who knows how to spin a tale of out-of-this-world romance and intrigue. Read on!

The Grace Gabbiano Mysteries: How They Began and Where They Are Now

I was taking a Forensics class at the local community college a few years back when the idea for the Grace Gabbiano Mysteries hit me. The class was being taught by the director of the Oregon State Patrol Forensics Laboratory, located in nearby Springfield. I subsequently took a Criminal Investigation class, taught over the 12-week course by different law enforcement officials, one of whom was a former detective with the Lane County Sheriff’s Office, and (at that time) the police chief of Coburg Police Department.

Both Lt. Mike Hurley and Chief Denny Ross were kind enough to let me pick their brains outside of class. These two intelligent men had spent their lives in law enforcement and had a wealth of information to share with me. As it turned out, how I was going to create the series turned out differently than I had originally planned, but I retained part of the original premise and it crops up periodically in the series.

The Grace Books, as I call them, feature Sgt. Grace Gabbiano, Police Chief Aidan Cruz, Grace’s entire Italian family, and a full contingent of CPD staff, officers, and reservists. Other characters make appearances throughout the books, but each story also has a new “cast,” so to speak. In Dressed to Die, Grace is faced with two murders, both men who are dressed in formal evening wear, wigs, and high-heeled sandals. Not your conventional deaths. In Sliced to Die, Chief Cruz signs Grace up to go undercover as a prostitute to help track down a serial kidney thief. Buried to Die introduces the reader to the body farm located in the middle of a large hazelnut orchard in Coburg. Grace discovers more than research is going on there when her former teacher turns up amid the corpses being studied. In Quilted to Die, the first body found is rolled up in the fund-raising quilt at the annual quilt show (which actually does occur in Coburg). In that book, I introduced the crop circles. 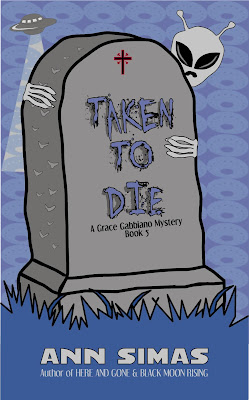 That takes me to Taken to Die, a July 31 release. I’m an avid stargazer and I’ve seen things in the night skies that are inexplicable. I watch Ancient Aliens and numerous other programs about UFOs and alien sightings. I’ve read The Day After Roswell and watched the Project Blue Book series. I’m not sure why I put those crop circles in Quilted to Die, but I knew I’d have fun with them in Taken. And, boy, did I!

I love research, and there is no shortage of information to be had about UFOs, crop circles, alien abductions, animal mutilations, Areas 51 and 52…I could go on. Typically, with the Internet, I research as I go and I never use anything that can’t be verified from at least three different sources. However, this time I reversed order and read Roswell first. I was constantly astounded by the facts presented by Major Phillip Corso, who was actually involved in the 1947 incident and the subsequent events connected to it.

When I contacted MUFON (Mutual UFO Network), I was told that some of what Corso wrote has been challenged. Regardless, I’m keeping an open mind. Our government is known to have withheld information on UFOs, as is the military. Only recently have armed forces’ pilots, commercial pilots, astronauts, and law enforcement officers been vocal about what they’ve witnessed from a vantage point most of us will never have. In essence, since they’ve spoken up, many with actual video footage, it’s forced the government and the military to be more open about what’s going on, not only in space, but on (and around) Earth.

I know there are people who pooh-pooh the idea of UFOs and aliens, and that’s fine, but for me, they exist. I’ve included some of the unusual things I’ve seen in the night skies in Taken. I knew when I wrote the last word in the book that the story couldn’t end there. I grew up in Colorado at a time when animal mutilations were rampant. Neither those nor the crop circles have ever been resolved, and I maybe they never will be. But there’s more to Taken to Die than crop circles and mutilations, and since I’m not giving any spoilers, you’ll have to read it to find out more.

What do I learn when dig into all this research I love to do? Two things: (1) You’re never too old to learn and (2) you never know what you’re going to learn that’s going to amaze the heck out of you!

Here’s a short blurb:
Mysterious crop circles, unexplained bright lights in the sky, UFOs, animal mutilations—what in the galaxy is going on in Coburg? Grace Gabbiano is determined to find out. Is it an alien invasion, or something more sinister and closer to home? 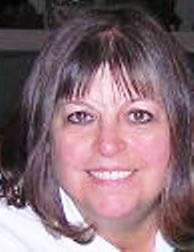 Ann Simas lives in Eugene, Oregon, but she is a Colorado girl at heart, having grown up in the Rocky Mountains. An avid word-lover since childhood, she penned her first fiction “book” in high school. The author of 27 novels, one novella, and seven short stories, she particularly likes to write a mix of mystery/thriller/suspense, with a love story and paranormal or supernatural elements.

In addition to being a three-time Romance Writers of Amer­ica Golden Heart Finalist, Ann is also an award-winning watercolorist and budding photographer who enjoys needlework and gardening in her spare time. She is her family’s “genealogist” and has been blessed with the opportunity to conduct first-hand research in Italy for both her writing and her family tree. The genealogy research from century’s-old documents, written in Italian, has been a supreme but gratifying and exciting challenge for her.

Do you have a new book coming out? Contact me via the form on my website (www.conniejohnsonhambley.com) to be featured on this blog!

As an author of crime novels and mysteries will tell you, constructing the perfect crime is terrific fun. Creating a conniving villain even better. The more innocent the victim, the more anger we feel at the crime.

When the victim is the perfect victim, our anger spikes to the next level.

and most importantly...
Right about now, readers should be scratching their heads. How could a person be so weak as to let bad things happen to him or her and remain silent?

Right about now, you might be thinking I'm not talking about fiction. You'd be right. Real crimes happen to real people in real life. I'm hurting and I'm mad.

The sad answer is that the perfect victims are the elderly.

No family is immune. Fame and wealth are often the bait for the criminal rather than an inoculation against it as the families of Peter Max and Stan Lee discovered. For our aging population, awareness of the crime should decrease it, but Forbes calls financial abuse of the elderly a hidden epidemic.

Financial abuse doesn't get the attention it deserves. The first reason is denial. We would never be the target nor permit a loved one to become a target. Right? Our aging parents would never dream they would fall victim to a phony charity, fake bill, or other solicitation. But when a family member places a stack of documents in front of them for their signature, any number of reasons contribute to that fate-filled signature. Misplaced trust is the most common. We deny the reality that a trusted family member could be a self-serving, self-centered ass who feels entitled to whatever they can take.

The second reason is that it's so darned personal. Families don't like to see a crime. Instead, they see siblings who don't get along or parents who had "favorites." Maybe "Poor Johnny" received a loan he never repaid. I know plenty of families where the details of the First Bank of Mom and Dad are quietly forgotten long after the debt grew cold. Forget about a paper trail or documents. Trust has a funny way of working against the people we most want to protect.

It's the victims that make my heart bleed. Their love for the criminal blinds them, and many parents place their needs below the needs of their children. The victims are the ones who worked hard and grew a tidy nest egg. They are the ones who instilled in their kids the values of honesty, generosity, and humility only to be repaid by lies, selfishness, and arrogance.

There is much written about elder abuse and I urge you to learn and talk about it. Learn the signs. Ask questions. Get help. The criminal wins when their crimes go undiscovered, or worse...unreported.

And maybe...just maybe...a small victory would be making one victim a little less perfect. 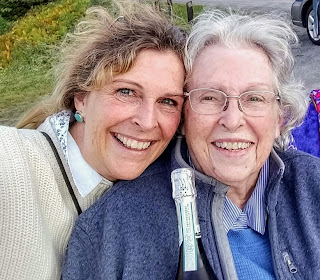 From Two to Five Stars 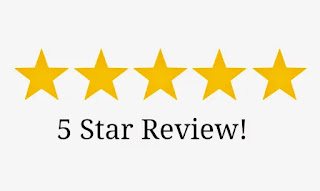 Getting a less than stellar rating on a book is not an author's favorite thing. Neither a book nor an author can be all things to all people. If a rating is accompanied by a well-written and insightful review, we can learn from it and move on. If that "meh" feedback is on the first book of a series, chances are pretty good that the rating giver won't move on to the rest of the series.

The Charity has received its share of five star reviews, so when a two star rating on Goodreads popped up without a corresponding review, I chalked it up to experience and didn't dwell on it. That is, I didn't give it much thought until after I compared books with the rating giver. I determined that my book wasn't her thing, and moved on.

That was three years ago. Last month, the second book in the series, The Troubles, received a four star rating from that same person!

And last week, the final book in the series, The Wake, received a five star rating from you-know-who.

So, thank you, Goodreads Reviewer, whoever you are. If you read this, I would love to hear why you came back to the series and why it grew on you! But you could be the shy type and don't want to talk too much. No worries. I understand.

Overall, I just want to thank you for clicking that little star button and giving me the feedback you did. So many readers don't bother to do even that!

So, if you're one of those readers who don't rate or review books, please know that authors really appreciate them.

It's summer reading time. Make an author happy with a little click! Thank you!